In this post we’ll be talking about the improvements we’ve made to the command line in Cerbero Suite.

If you’re familiar with command-line scripting in Cerbero Suite, you might know that by running a script without the “-c” argument all output is redirected to the output view in the main window.

In certain cases, however, it might be desirable to avoid the creation of a main window.

For this purpose we have introduced the ‘-g’ argument.

If the script doesn’t create an output view, then the output of the ‘print’ function isn’t visible.

Furthermore, in the upcoming 5.5 version of Cerbero Suite we have added terminal support on Windows.

On Windows running scripts with the ‘-c’ argument results in not being able to see the stdout output. The reason for this is that the cerpro executable is built as a GUI application and therefore is not attached to a terminal.

To overcome this limitation we have added a launcher on Windows called “cerpro_console.exe”.

The code asks the user to input a string and prints it back.

Of course, the cerpro_console executable can be used to launch any functionality of Cerbero Suite which supports console mode (‘-c’).

For example the following command prints out the command-line help to stdout:

Soon we’ll publish a complete tutorial about command-line scripting on our SDK page.

While in the Classic edition all UI functions are available, the Metal edition comes without UI dependencies.

The Metal edition is designed to be run in cloud and server environments which may lack a graphical interface.

Plugins which import graphical functions are compatible with the Metal edition: all UI functions are available, though they are provided only as stubs. A few graphical methods like msgBox fall back to console I/O.

Providing two editions of Cerbero Engine allows us to offer the perfect fit for organizations which need a powerful and flexible back-end for their services.

This utility can be invoked as an action from a hex view or a Carbon disassembly. It can be used to brute-force the decryption of strings and byte-arrays.

String Decrypter supports various types of string encodings combined with endianness and it can filter decoded strings with the following options:

The plugin supports parallel execution, which will make the difference if more algorithms are added to the list. Also, for every decryption method the number of combinations is displayed.

For every decrypted entry, String Decrypter shows the performed operation along with the string encoding (if available).

Here summarized are the main news of this release of Cerbero Suite 5.4 and Cerbero Engine 2.4.

Thanks to one of our customers who reported it to us we have introduced support for the .NET ReadyToRun format. 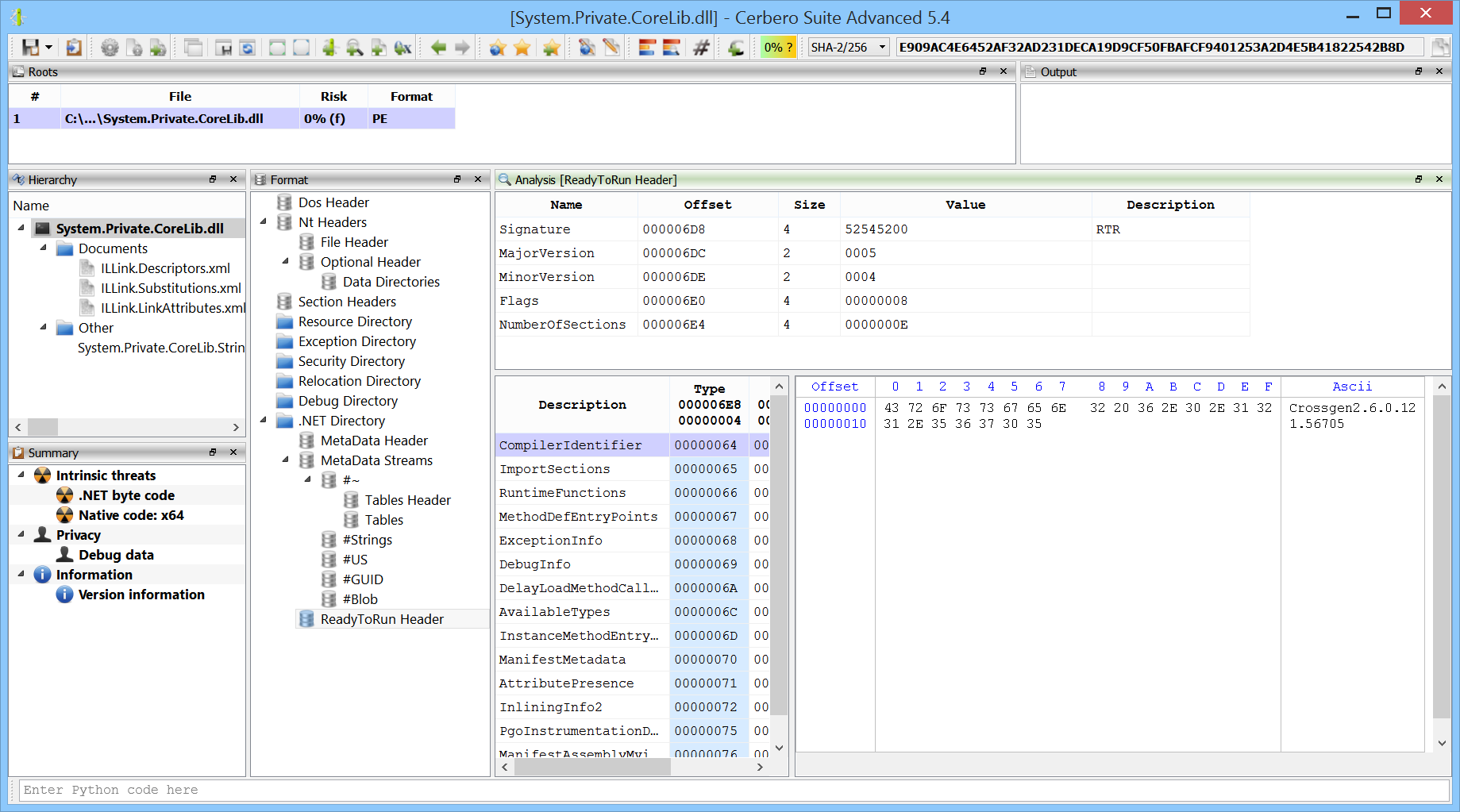 We already support NGen generated native images and our support for the ReadyToRun format makes sure that it is not mistaken for an NGen generated image.

This release of Cerbero Suite introduces the capability to open processes in the hex editor on Linux. Windows has already supported this feature since the introduction of our hex workspace. 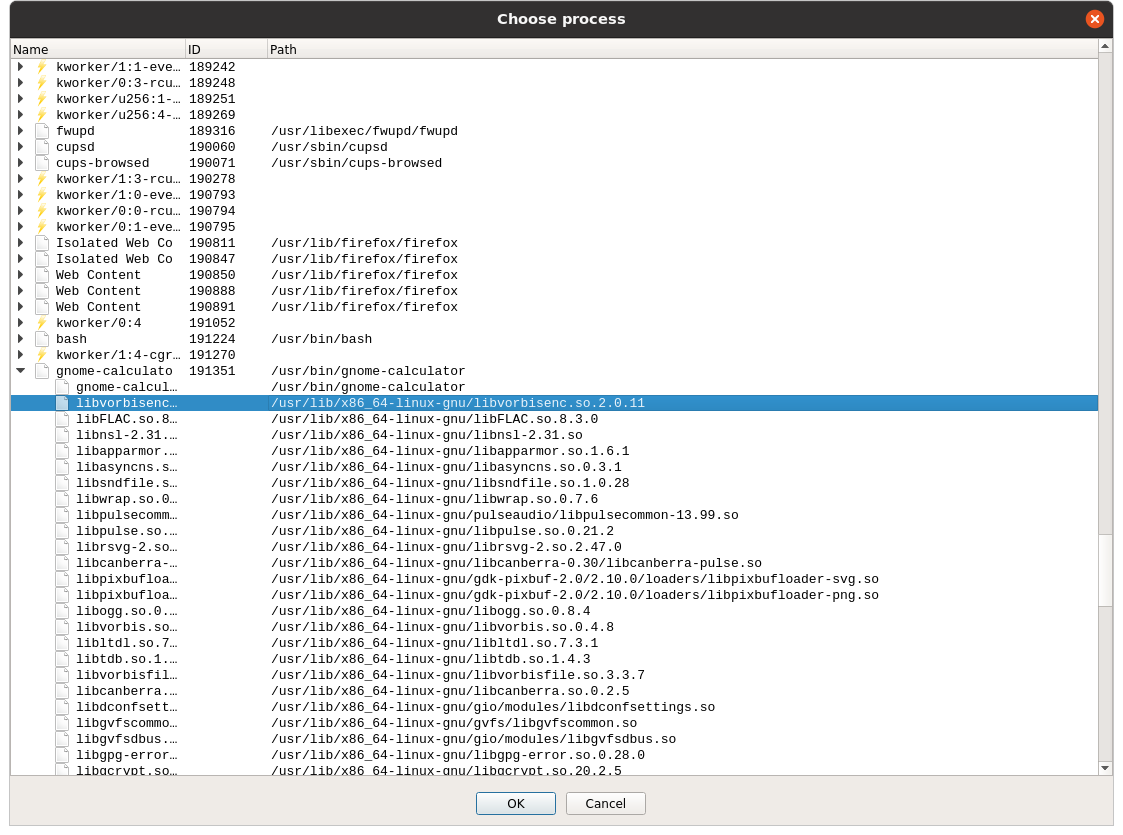 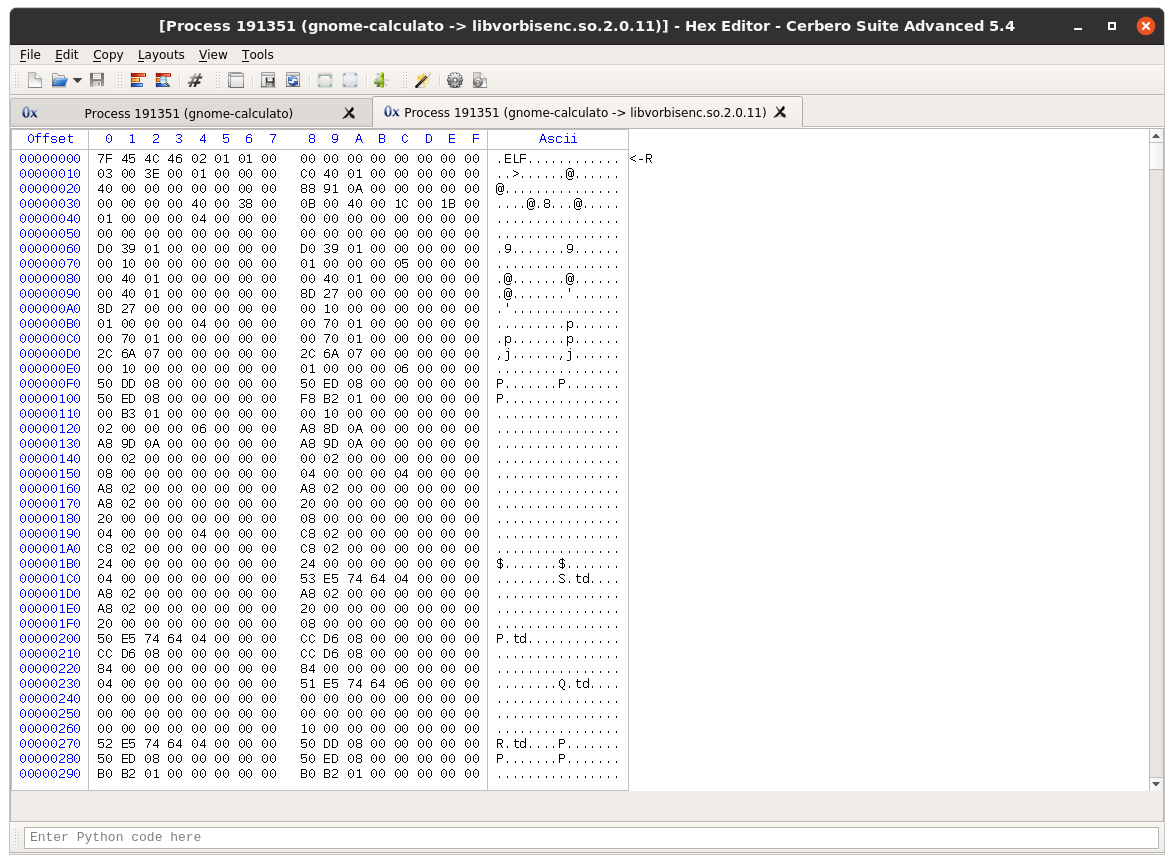 We have also exposed our process API in the Core module to Python and documented it.

We have released our API Solver package on Cerbero Store for all commercial licenses of Cerbero Suite Advanced. This package is especially useful when analyzing shellcode. 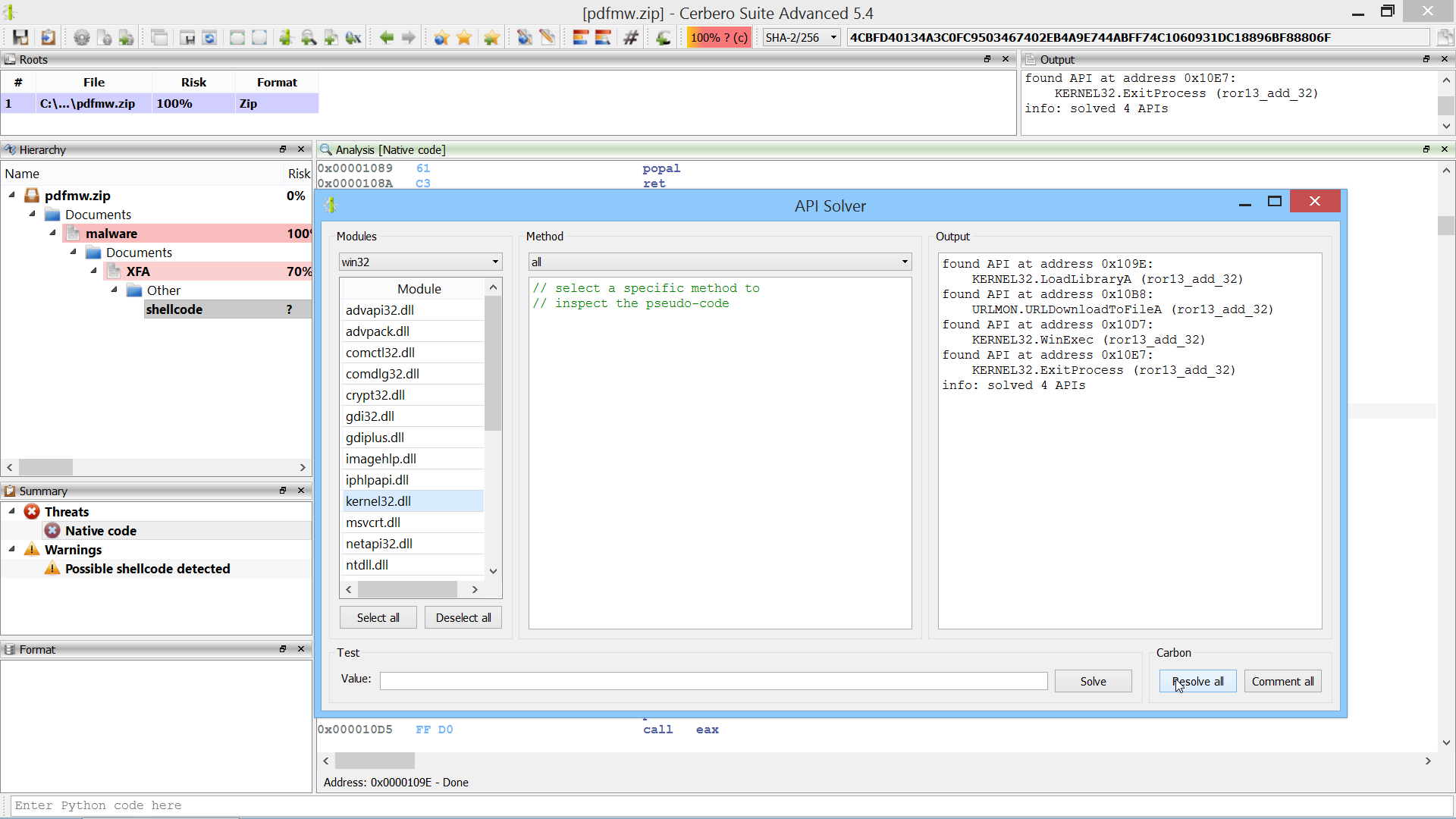 We moved our built-in password brute-forcers to an external package on Cerbero Store called “Common Passwords”. Cerbero Suite Advanced (both commercial and non-commercial) and Cerbero Engine have access to the package. 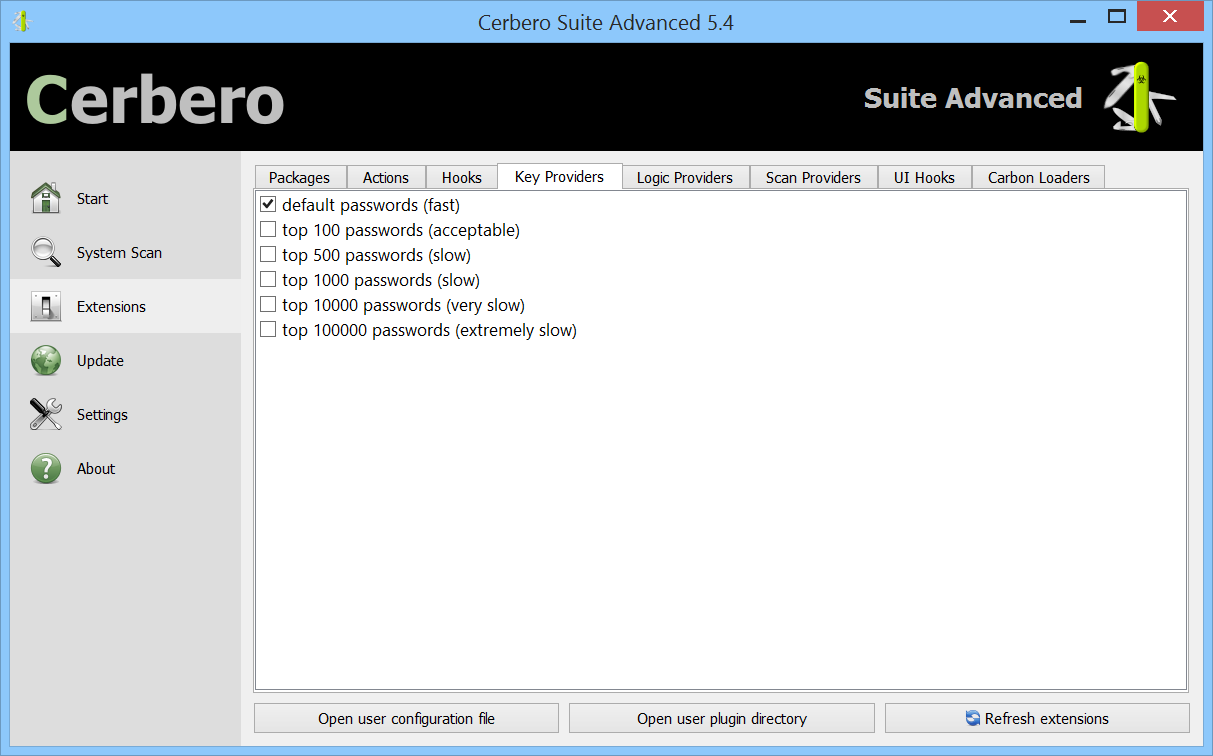 We have fully documented our Excel macro emulator and spreadsheet visualization module. 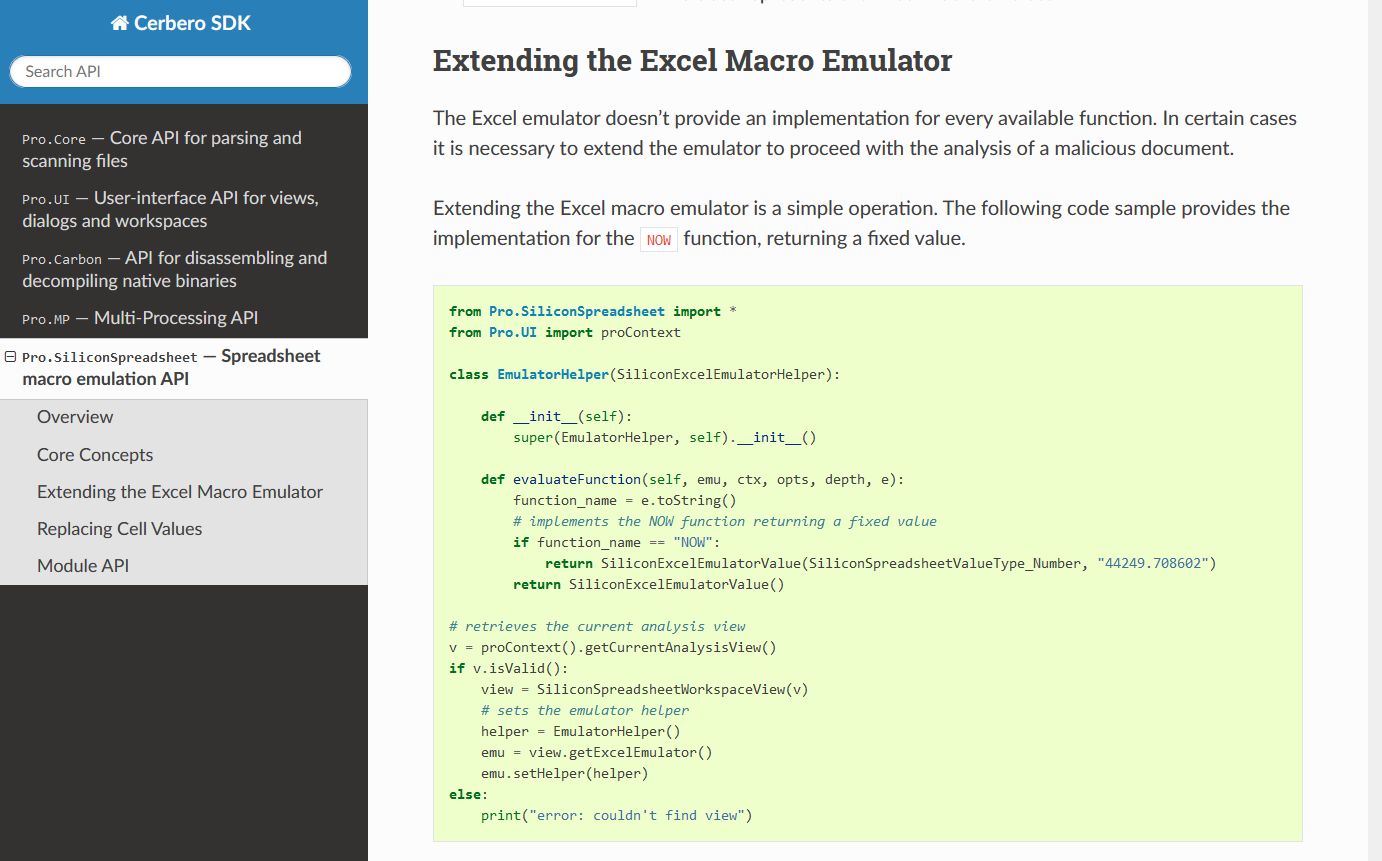 We have improved our support for Microsoft’s ITSF (also known as CHM) format and we have exposed the format to our Python SDK. 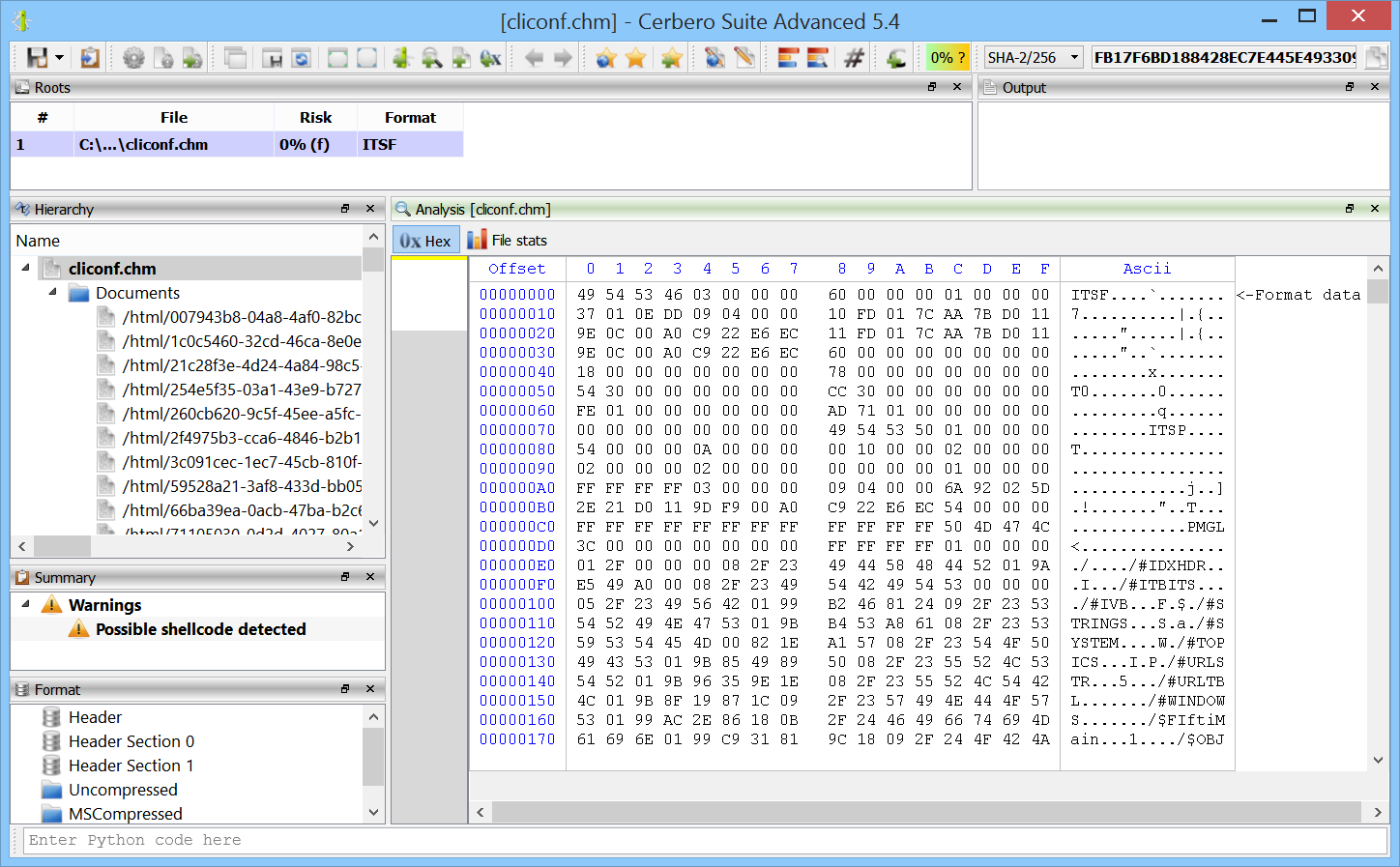 We made it very easy to select contiguous ASCII, Hex and Base64 strings in the hex editor. This comes very handy when loading embedded files or decoding data. 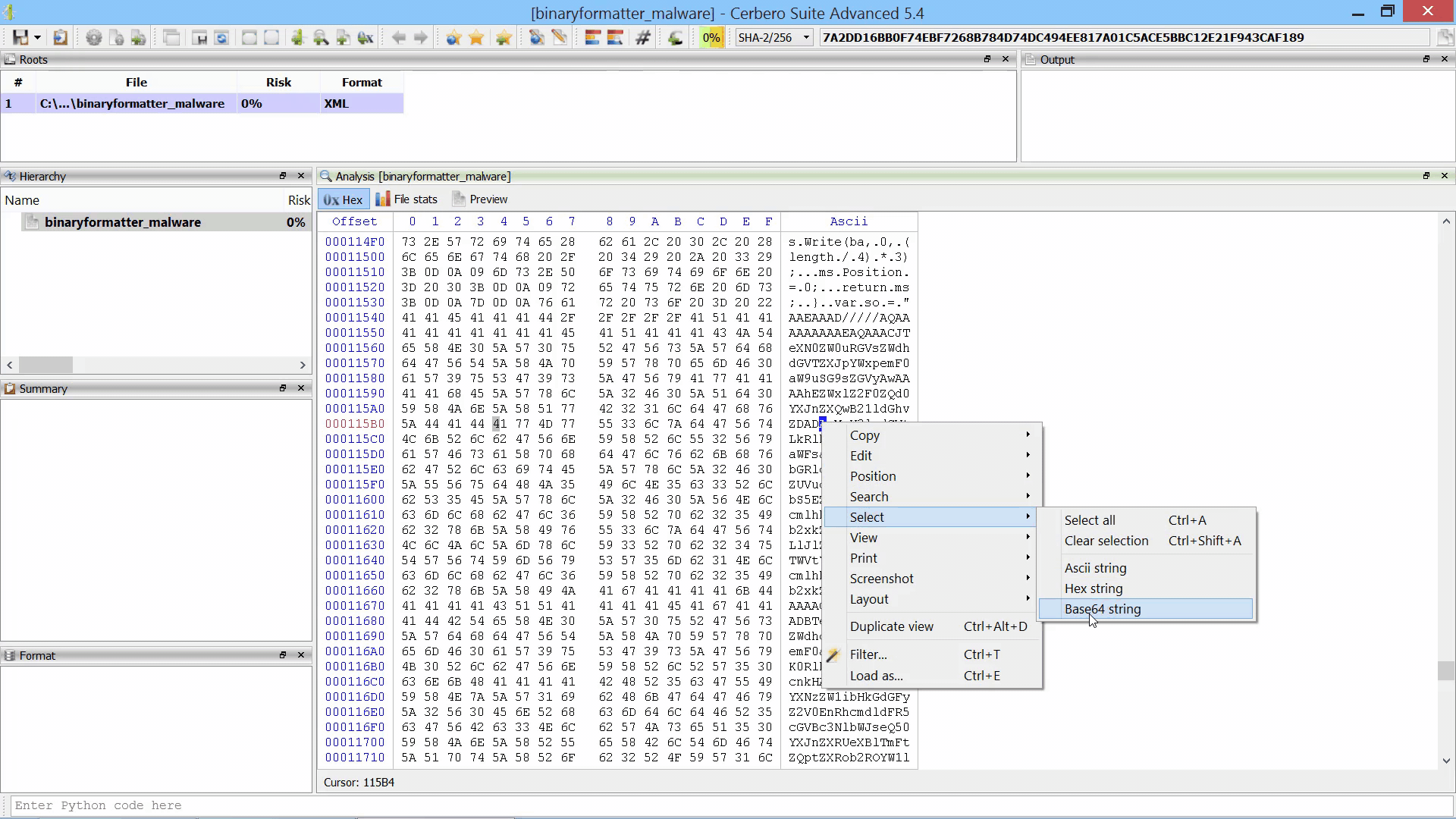 We have also made other minor improvements and fixed a few bugs.

We have just released our API Solver package on Cerbero Store for all commercial licenses of Cerbero Suite Advanced.

You can click on the image for a video introduction.

API Solver comes very handy to analyze shellcode and it can also be used programmatically:

Stay tuned as we’ll soon be releasing more packages for all types of licenses on Cerbero Store!

The upcoming 5.4 version of Cerbero Suite introduces the capability to open processes in the hex editor on Linux. Windows has already supported this feature since the introduction of our hex workspace. 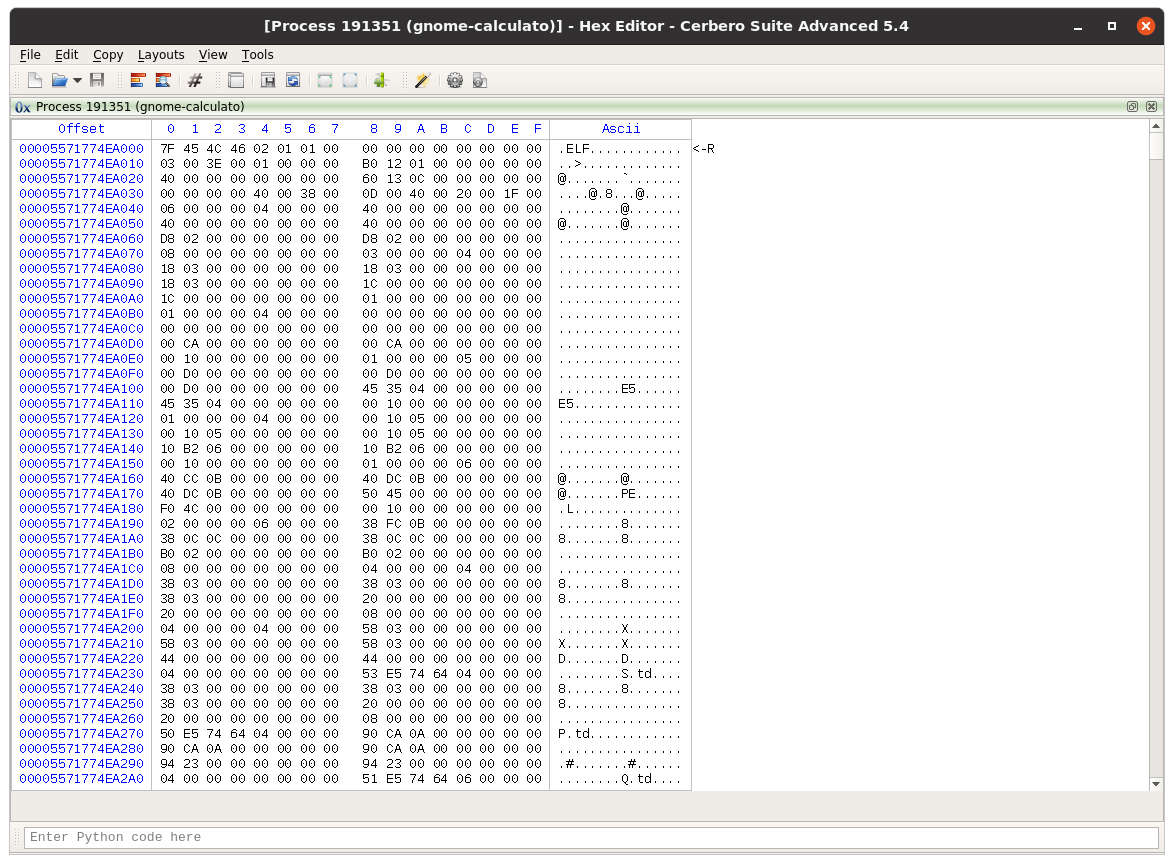 Just like on Windows, it is not only possible to edit the entire address space, but also to edit individual modules.

If opening a process fails, most probably it is because root privileges are required to perform the operation. To avoid having the application create application files with different access rights, it is recommended to create a portable copy of Cerbero Suite and run that copy as root.

Creating a portable copy can be achieved from Settings -> Portable. 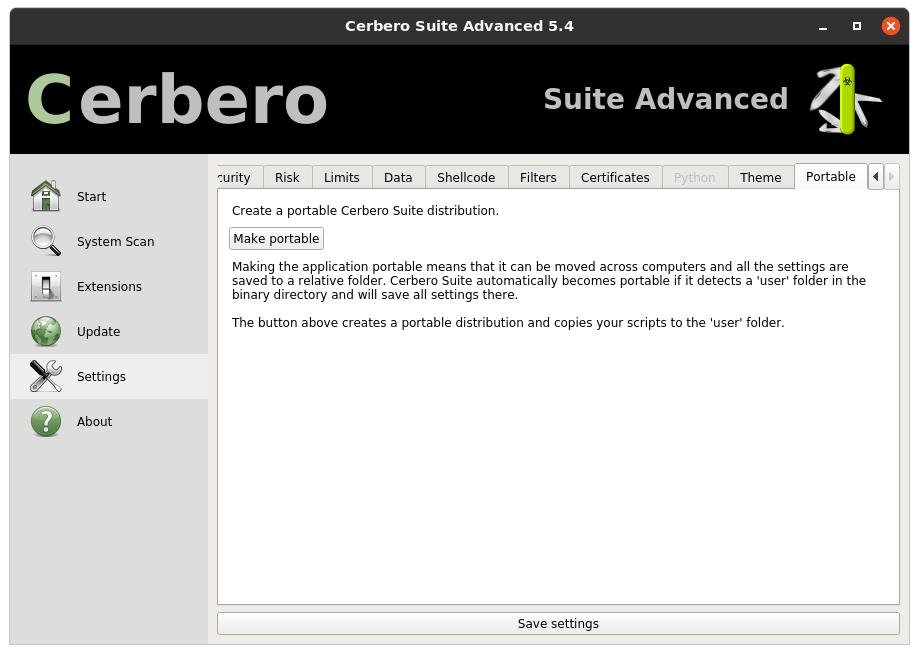 We moved our built-in password brute-forcers to an external package on Cerbero Store called “Common Passwords”. The upcoming version 5.4 Cerbero Suite Advanced (both commercial and non-commercial) and the version 2.4 of Cerbero Engine will have access to the package.

There are two reasons why we created a standalone package:

1) We wanted to provide the same functionality to Cerbero Engine.

2) We intend to expand on the functionality of this package in the future, so making it easy to update was essential.

To obtain the package just open Cerbero Store and install it from there. 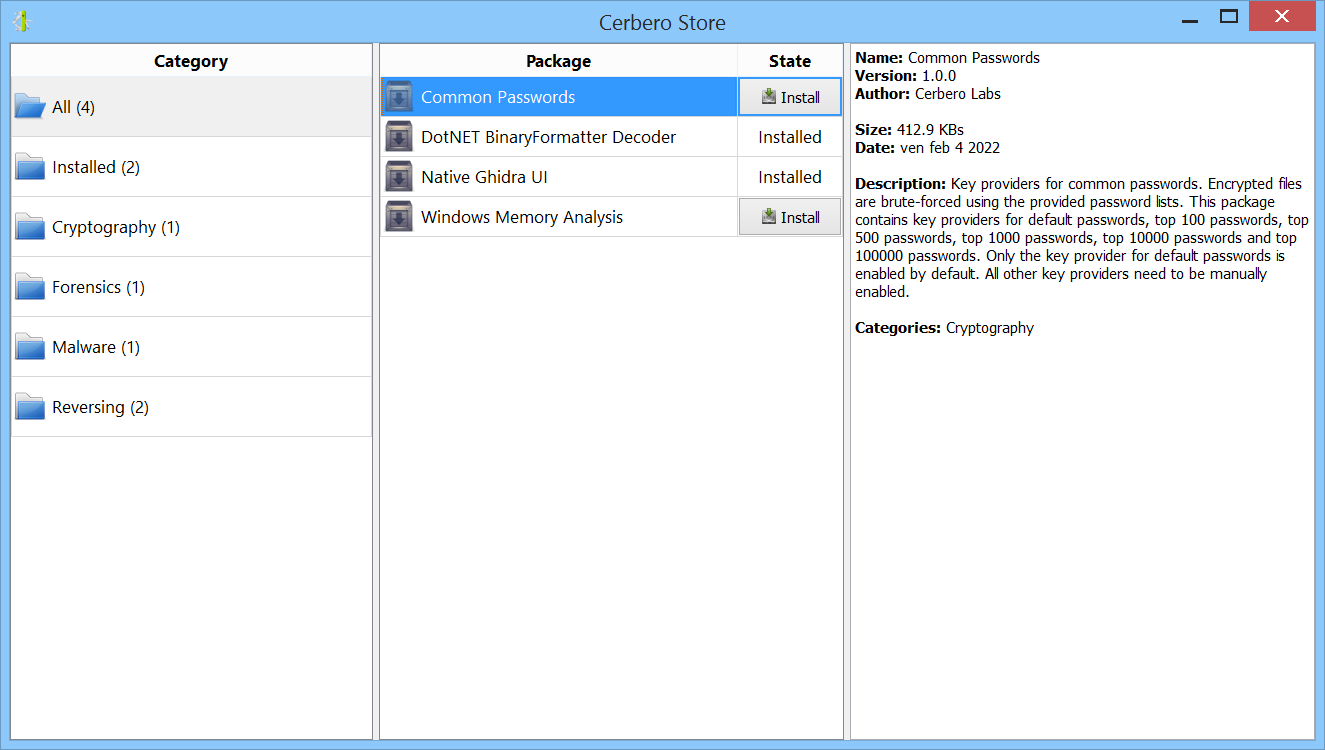 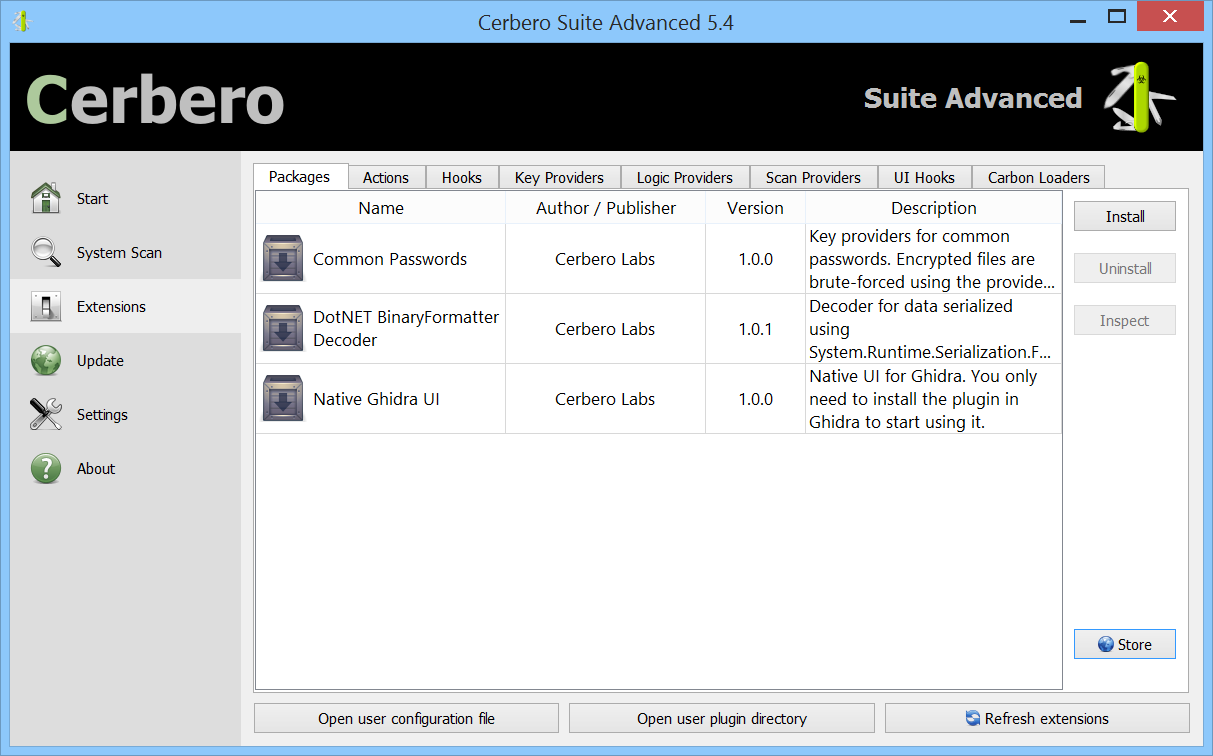 Only the default passwords key provider is enabled by default. Other key providers must be enabled manually.

This is a very practical package if you want to avoid typing usual passwords like “password” or “infected”. These are considered default passwords and just installing the package will have you covered.

The upcoming 5.4 version of Cerbero Suite and 2.4 of Cerbero Engine come with improved support for Microsoft’s ITSF (also known as CHM) format.

We also exposed the format to our Python SDK.

The following sample enumerates files in a CHM. The commented out line of code extracts the file data.

We demonstrate the use of our newly released package for commercial licenses to decode the BinaryFormatter encoded payload in a malicious Microsoft HTML Application. 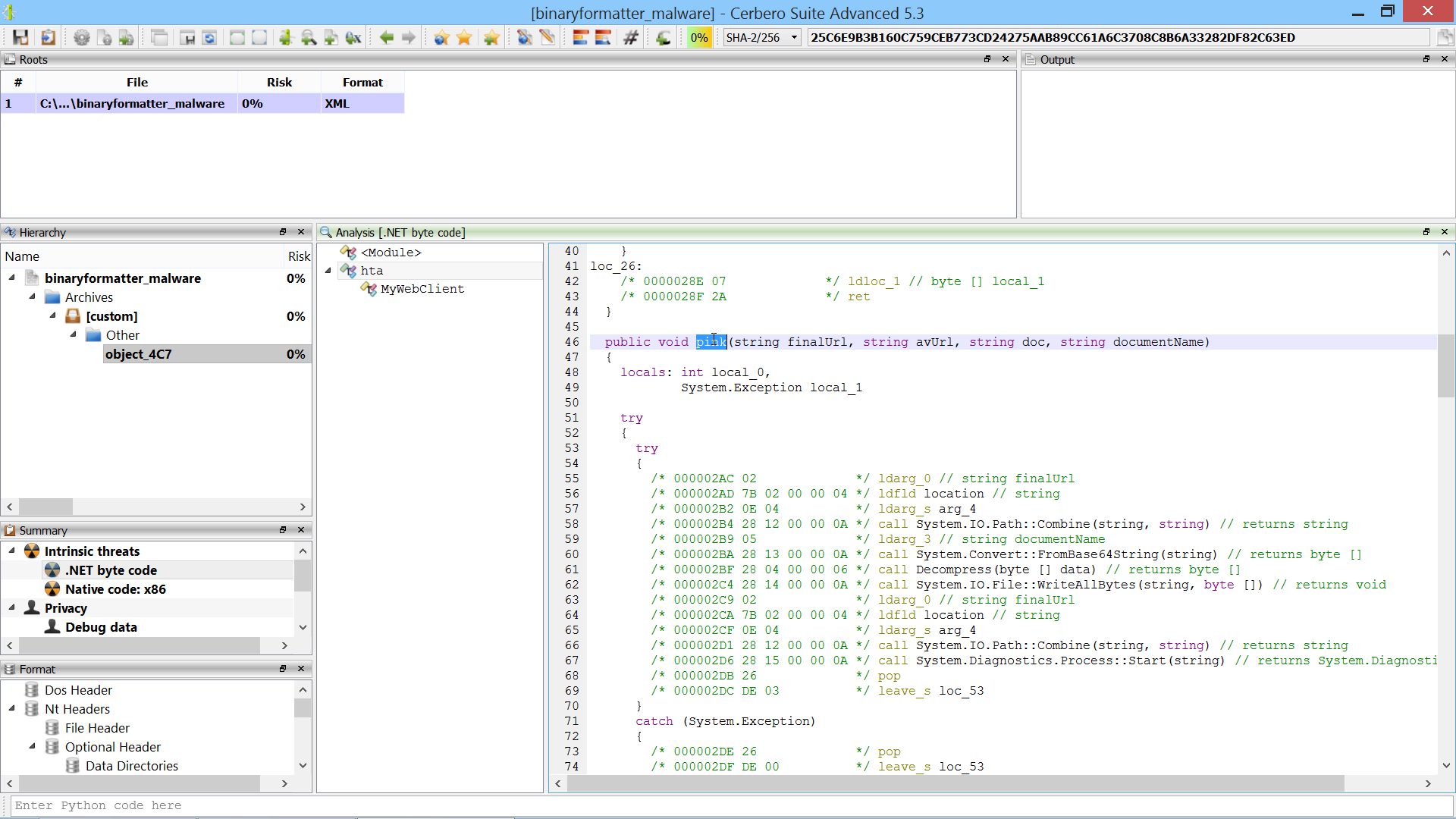 We’re happy to announce the release of Cerbero Suite 5.3 and Cerbero Engine 2.3!

The main addition to this release is the introduction of our latest milestone: Cerbero Store.

We have covered Cerbero Store in depth in our previous post.

TL;DR: Cerbero Store modularizes our setup process, so that updates can be blazingly fast and experimental features can be introduced on a rolling basis. The only thing you need to access Cerbero Store is a current license for either Cerbero Suite or Cerbero Engine. Updating packages from Cerbero Store is equally comfortable.

We also moved our native UI for Ghidra plugin and our Windows memory analysis to packages on Cerbero Store.

In the next months we’ll be releasing new features not only in Cerbero Suite and Cerbero Engine, but also as packages on Cerbero Store, so make sure to follow us on our blog, Twitter or LinkedIn to stay up to date with the latest news!